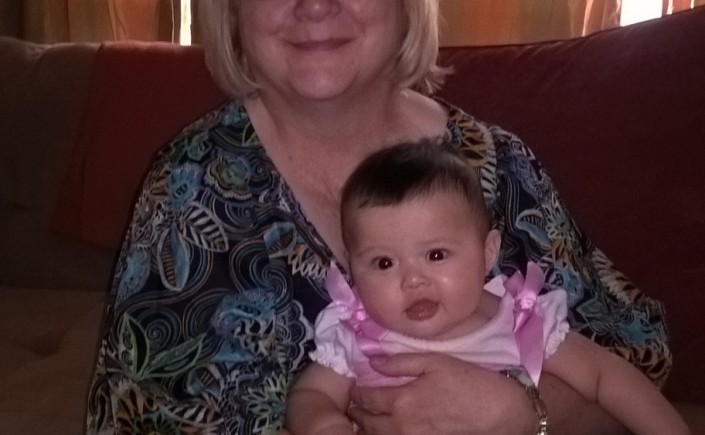 Every day is special for me because I have a granddaughter, but today, this morning, topped them all.  And wow! Today my five-month-old grandbaby wrote to me –a private Facebook message, but I will share it with you.   Xffr gut a cnn, lx÷

Yes, can you believe it? She wrote Xffr gut a cnn, lx÷

I admit that her mom opened Facebook for her and that the baby’s spelling is “invented spelling.”  (Thanks, Kim, for not correcting her work and discouraging your daughter’s fine effort.)  However, after years of reading “invented spelling” as a teacher, I feel that I correctly interpreted  Xffr gut a cnn, lx÷  to mean something like, “Dear Grandmommy, My love for you can never be divided.”

How proud I am. She used a capital letter, a comma and a mathematical symbol, the division sign. Now, wasn’t that an interesting sentence?

Perhaps she will grow up to be a writer and a mathematician? The best of both worlds!

My granddaughter’s first written communication to me—what a great day!

Ah, the insane bliss of grandmotherhood!

Did you know that the billionaire author of the Harry Potter books got her idea to write about a young wizard on a four-ride (delayed) train ride? When my daughter and son-in-law asked me to go to Washington DC to watch the baby while they attended a wedding, I thought, “I’ll take the train. Perhaps what worked for J. K. Rowling will work for me.”

I booked my trip, senior fare, business class. This weekend was my summer vacation so I decided that I could splurge on the extra twenty-five dollars to have enough leg room in business class. The Philly-DC ride is only two hours so I’d only get half of the creative thinking time needed by J.K.R. so why not maximize the time by being comfy? Business class is always somewhat quieter, too.

The “kids” were taking me home in the car so I wouldn’t have another train ride for a little while. I would take advantage of every minute in business class.

My husband, Carlos, drove me to the NJ Transit Cherry Hill station that is behind the Shop-Rite to catch the 5:42 a.m. Yes, 5:42 a.m. We got up at 4:30 a.m. from our beds in Cramer Hill to make sure that I wouldn’t miss it and I didn’t. The senior fare was $1.50. What a bargain! Sometimes it’s almost worth getting old. Almost.

That train to Philly was quiet. Passengers looked stunned that they were out of bed that early. At least, I was.

When I arrived at 30th Street Station, I felt vacation-y. You know that tired, but excited, anticipatory feeling? The woman at the tickets told me that I could catch the very next train. Business class. No extra cost. There were seats. I would not have to wait until the 8:40 a.m. train. Well, okey-dokey. I’d have more time to breakfast in Union Square, my favorite train station.

I thought about money and J. K. Rowling. Who wouldn’t like to become a billionaire? However, I did read that sometimes Ms. Rowling isn’t a full billionaire because she gives so much money to charity. That’s a problem that I wouldn’t mind.  Think of the headlines, “CAMDEN WOMAN NO LONGER BILLIONAIRE BECAUSE SHE GIVES SO MUCH TO CHARITY!”

Female passengers kept touching their hair-dos because it was warm and humid down there. The humidity overcame hair spray. ( I did notice that the men weren’t touching their heads.Most of the men were bald.  But, looking prosperous!) Luckily, I hadn’t done anything fancy—my hair-do had been the 4:30 a.m. wash and brush special.

Where was the train? I was getting bored. I tried to create a story while I surveyed the others who were waiting impatiently, but politely. People folded newspapers and tucked them under their arms, tapped feet and complained that the train was late.

A train employee strutted through groups of disgruntled passengers and shouted out, “Don’t kill the messenger. I’m only the messenger. You have to board another train because your train had a problem.”

We trooped upstairs and  looked at each other in despair, but, in a few minutes, we trooped back down to board the ACELA. The fast train. The nicest train. The most expensive train! At no extra cost and with an even earlier arrival into DC!

Oops! Less time for me to be J. K. Rowling. I knew that I would have to make the most of every minute on the train. I wasn’t going to have four hours, not even two full hours to get an idea for something to write. At least, twenty minutes less. I had to focus, focus, focus while on the train. No looking out the window, no chatting with other passengers, no thinking about possible frizzy hair.

I blissed in the ACELA silence of people working on laptops or staring into cell phones. The perfect atmosphere to get an idea.  I wondered if J. K. Rowling and I could be BFFs.

But, I felt myself blinking uncontrollably.

The next thing I knew a voice came over the speaker, “Last stop. Washington, DC.”